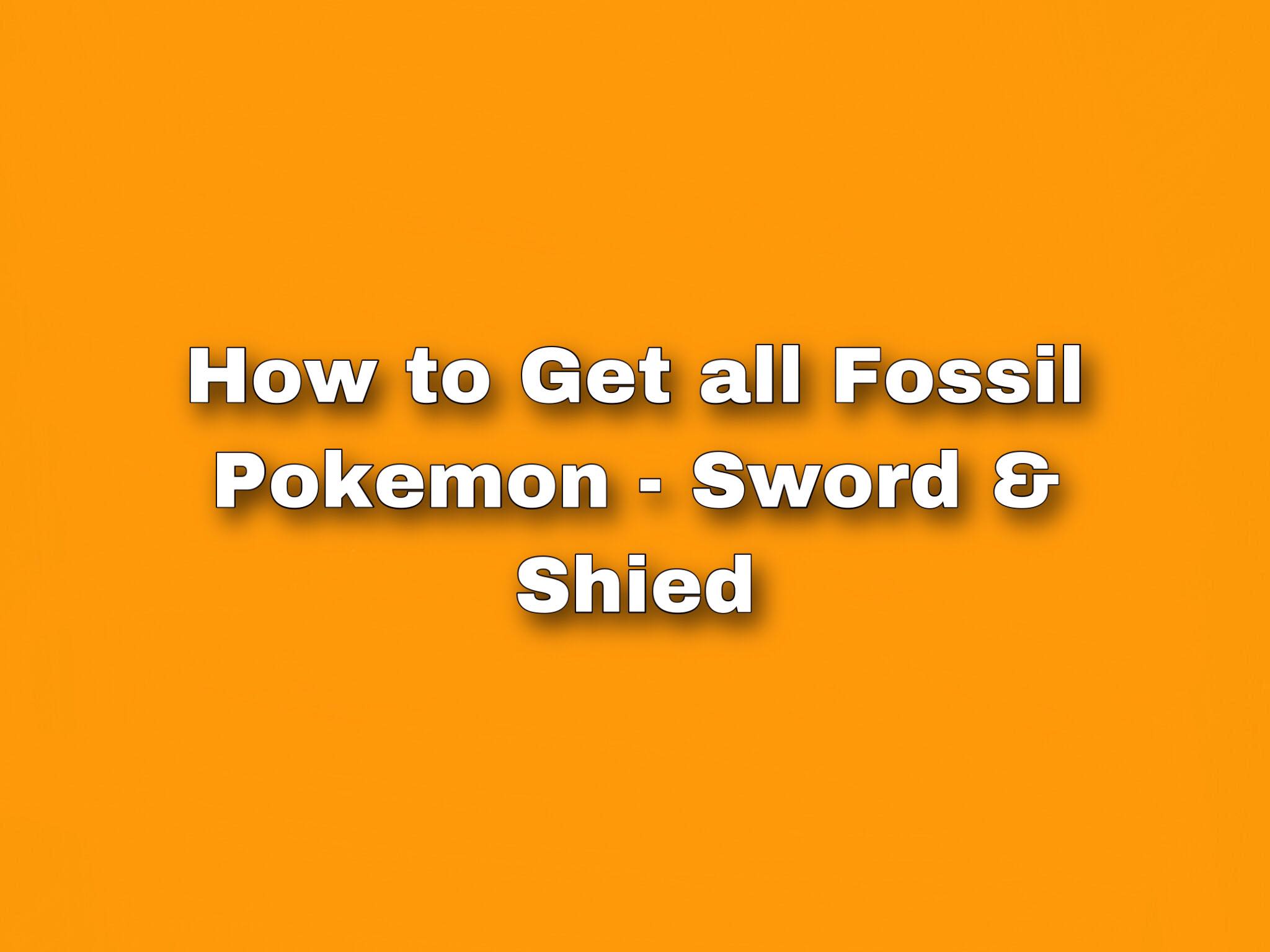 Today we are talking about how to get all Four Fossil Pokemon – Dracozolt , Arctozolt , Dracovish & Arctovish Pokemon Sword and shield.

The Four Pokemon that we are going to be going after our Drakh result art those old Brockovich and art dovish the Pokemon that could be restored from fossils they work much differently than they did in previous games,

You could totally get all four Pokemon in one game. It’s just gonna be a little difficult. Now to that of my understanding by default and Pokemon sword.

You are going to find the bird fossil and the Dinno fossil inside of the glistening item encounter table in the wild area especially in the dusty ball.

Where rare bones and fossils are more predominant and if you are playing Pokemon shield then you are more likely to find drake fossils and fish fossils in addition.

To that on route 6, there is a chance you can find fossils there as well now. There is a very good chance that you are playing Pokemon the sword or shield and you have one of the fossils and you have no idea how to restore the other. So to put it in,

perspective on the post, you can get the other two fossils that are less common for you game.

It’s going to cost you that’s digging duo. There you can find two guys who were standing kind of right outside of the breeder in the wild area,not that guy over there.

These two guys maybe right there and they are unique because the one on the right is more likely to get you not as good of loot and more items.

The one on the left is more likely to get you better items but not as many of them. So I did about 40 minutes of testing between the two digging brothers and if you were to spend 20,000 watts.

I don’t see too much of a difference, however if I just have to say gut feeling I would say go for the brother on the left just because he was able to get me the first fossil that I needed of a specific type faster.

So it might be superstition there might be something to it but if I say if you are looking for just the two individual fossils that are not more predominant in your game.

Go for the guy on the left again. It’s all completely random, so best of luck but bottom line is you can have all four of the fossils in one game without trading granted you can totally trade and save yourself a lot of watts like if you have people to talk to and play this game with,

it’s gonna make your life a lot easier in order to restore the fossils Make your way to route 6 where you will clearly see where it says fossil restoration. By the way pro tip if you speak with people who have a camp set up on a route that is how you make a fast travel point to that route,

So from camper which if you don’t know where the camper is, you need to go up a ladder, this is to the left of that lady who’s walking around on the right Sarah good head up here and if we speak with her name.

this is the most likely combination of fossils that you have chosen and you are going to be getting yourself aren’t those old art dassault which has electric and ice. It’s clearly an electric Pokemon that should not be stuck inside of an ice Pokemon’s body and I feel so bad for it.

We should put it out of its misery. If you are only playing sword, if this is the only fossil you found and you are probably not thinking , it’s too amazing if you are playing Pokemon shield.

You Most Likely have a fish fossil for the head and a drink fossil for the body that is going to be giving you the rock, you wish which is a water dragon Pokemon.

Once you start trading your fossils or using the digging duo in order to get the additional fossils, then you are able to combine the bird from sword and the drake from shield and get yourself the rock result,

which is the little electric head on side of the big dragon body and it looks like the dragon body was just literally cut in half and you just have this little guy hanging out of the front half and he is like I mean he is not freezing to death.

Which is nice for him but still like how does he eat like think of how much that little head needs to eat in order to fuel that lower half of the body and the other combination is having the fish head and the Dino body and that’s art the fish which honestly looks the most coherent out of all of them.

I have no complaints about this until you read its pokedex entry, these four fossils Pokemon are found between number 374 and 377, right after Ditto and right before Charmander.

I don’t know if they are any good in combat like batting or anything because I found them after I was done with the game you get them all double ten strong jaws a dope ability hustle ice bodied.

These are all pretty good abilities that could Ally Volt absorb water and ice is a pretty common typing cloister and Lapras electric and dragon Zekron. Yeah it was that Grom also mega Ampharos that doesn’t count water and dragon like kingdra and ice electric.

I think that’s new Rotom. Frost Rotom is ice electric but this is the first Pokemon that’s ice electric by default by electro dragon is pretty cool and electric ice is really cool too.

I haven’t looked at their weaknesses or anything for all I know they are weak to everything m. But if you are playing through and you are on this route and you have some of these fossils and you can restore them and use them on your team and you enjoy them go for it.

If you are gonna get this for Pokedex throw them into a box or forget about them. Then Great. All done Guys. Thanks for staying with Shyoz.